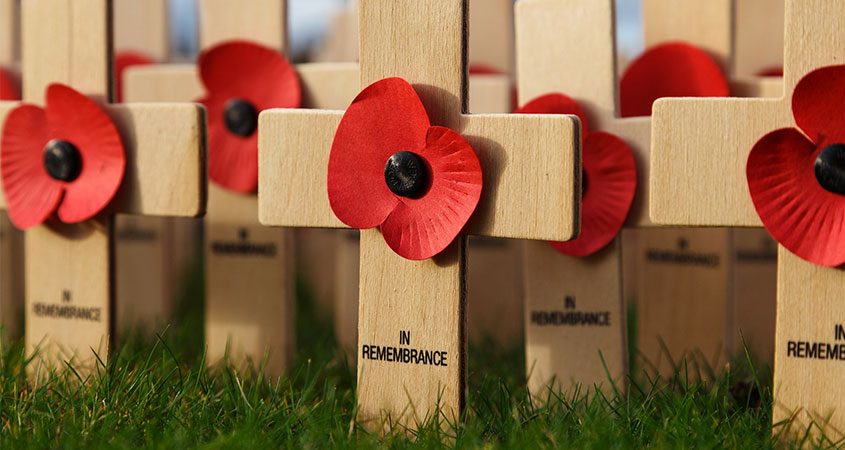 In this special story, we bring you a guide to all of the Remembrance Day commemorations in Portsmouth…

“In Flanders’ fields the poppies blow
Between the crosses, row on row,
That mark our place, and in the sky,
The larks, still bravely singing, fly
Scarce heard among the guns below.”

Sunday 11th November 2018 marks the centenary anniversary of the end of World War 1, and 73 years since the end of World War 2 and people across the UK will once again don a poppy in remembrance of those who sacrificed their lives and freedom so that we could enjoy ours.

In each town and city across the country, we will come together to commemorate the lives of the brave soldiers and personnel who contributed so much, and most UK towns and cities have their own story to tell.

Port towns around the country were pivotal in the war effort, but Portsmouth’s role was particularly vital, considering its historical status as “the world’s greatest naval port” – a title it had garnered at the height of the British Empire.

During World War 1, Portsmouth Dockyard employed 23,000 people, and throughout the war, around 1200 ships were refitted in the dockyard, making it one of the most strategic ports in the empire at the time. Nearly 6,000 men from Portsmouth were killed in the First World War.

As a major Naval Base and Dockyard the city was an obvious target and was bombed extensively during the Second World War in a series of Nazi German Luftwaffe night-time air raids, which began on 24 August 1940. Much of the city was destroyed in some 67 air raids, including 6,549 houses. By the end of the war 930 people had been killed, with 1,216 injured. And, while most of the city has since been rebuilt, to this day developers still occasionally find unexploded bombs.

Southsea beach and Portsmouth Harbour were military embarkation points for the D-Day landings on 6 June 1944. Southwick House, just to the north of Portsmouth, had been chosen as the headquarters for none other than the Supreme Allied Commander, US General Dwight D. Eisenhower, during D-Day.

To commemorate 100 years since the end of WW1, Portsmouth City Council is holding a number of services and events.

Until Monday 12th November, Royal British Legion knitted poppies project will be on display on the pillars of the Guildhall and around the balustrades of the WWI memorial, and until 11th November there will be a special photography exhibition called ‘Standing in Silence’ by University of Portsmouth student John Farnhill at St Thomas’s Cathedral, Old Portsmouth.

From 20th to the 25th November, the exhibition will move to St Mary’s Church, Portchester Castle.

On Thursday 8th November at 11:00am, there will be the Gardens of Remembrance service at the World War I memorial, Guildhall Square, while Saturday 10th November will see the Pompey Pals in a 24-hour vigil to honour the fallen of World War 1 at the Cenotaph.

Finally, at 7:05pm a bell-ringing ceremony called ‘Battle’s Over – Ringing out for peace’ will take place in Portsmouth’s Anglican Cathedral as churches and cathedrals across the country take part in this national initiative.

In addition to the main event, there will be a number of smaller events to mark the Centenary Remembrance Day, including the unveiling of boards across the city naming the 6,000 men who died in the Great War. From 5th November the soldiers’ names will be displayed on boards to be erected in the streets where they lived to honour them and thank them for their sacrifice. All boards will be in place for the commemorations on 11th November.

Council Leader Cllr Gerald Vernon Jackson who put up the first board in Reginald Road, said: “This is a poignant way of remembering our fallen first world one heroes and enabling residents to connect with their local history and community.”

The greatest losses were sustained by Newcome Road which lost 24 residents and King Street and Reginald Road which each lost 23 residents. The names of those that the council doesn’t have addresses for will be displayed on the Big Screen and all the names are on the city’s World War 1 memorial.

British Legion Community Fundraiser Sarah Ferris, commented: “This Poppy Appeal, we mark 100 years since the end of the First World War, The Royal British Legion is asking the nation to say ‘Thank You’ to the entire First World War generation who served, sacrificed and changed our world. We are thanking the servicemen we often think of during Remembrance and Portsmouth City Council has chosen to do just this by displaying their own #ThankYou100 memorial installations throughout the city.”

Finally, a trail honouring village heroes killed in the First World War, according to local press. 38 life-sized statues of soldiers have been placed across the parish of Buriton, with each representing a man from the village who died in the war. The statues have been placed close to their former homes.

However, one of the soldiers has been left out from the trail, and the aim of the route is to find out which man is missing and work out the average age of those to have died in the war. Entry is £3 with all proceeds going to the Royal British Legion.

For more information on any of the events listed above, visit –

If you want to learn more about Portsmouth during WW1 please contact the History Centre 023 92 68 8046 or email PortsmouthHistoryCentre@portsmouthcc.gov.uk